Hey everybody I'm completely new to this website (and forums in general. Currently I have a 1979 Jeep J10 LWB (Orange) and a 1983 Jeep J10 Honcho SWB (tan). The Honcho is going to be the focus of this thread. Currently on the honcho, I am putting a 5.3 LS with a 4L60E out of a 2000's chevy truck into it. I am on a fairly tight budget (seeing as tho I'm only 15). I have the engine in, and the truck is up and running and driving. That is the basics of the truck and where it is right now.

As for the back story of the truck, I got it about a year and a half ago out of a local junkyard near me. We assume the truck was wrecked/rear ended at one point because it has been repainted and (we think) the bed has been replaced on it because the bed is super rusty, but the cab and front clip is super clean. I got it without a title, because the junkyard owner who had it never got the title from the previous people. So, we are in the process of getting a bonded title for it. I got the truck for $550 with a set of doors off of a wagoneer thrown in with the deal. The truck had a 360 with a 4 barrel and 3 speed auto in it, with 64,000 original miles, and the engine ran, but the transmission was giving out, and the engine bent pushrods like crazy because it sat for so long. So, since my dad had a 5.3 with a 4L60E and a NP241C with 73,000 miles sitting around, we thought about it a little bit and decided to put it in there. The swap actually turned out really well so far. We ordered some universal motor mounts for an LS swap (they weren't too expensive but still good quality), and with the motor mounts where we wanted them, we were actually able to reuse the original J10 transmission cross member and the silverado driveshaft, which saved me a LOT of money. We decided after a bit of contemplation that we are going to run the stock J10 radiator since it will save lots of money and time in fabricating. We also are using the original silverado exhaust manifolds. I haven't gotten it sent out to get the exhaust, which is next on my list which will happen sometime probably early march.

Now to the exterior. The truck has a three inch lift (from the previous owner). I have a set of 33x12.50s that I'm currently running on it, but they are super bald, so I'm going to look at getting a set of 33x10.50s when I get my next set. It doesn't have honcho stripes on it anymore, but one day while me and my brother were messing around, doing lord knows what, my brother noticed the stripes on the inside of the door (where the outer skin wraps around the door shell), and on the back of the fenders in the door jam. I have no idea why the owners wouldn't put the honcho stripes back on after it was painted, but to each their own I guess. Anyways, inside the cab is really clean. Sadly, some of the interior pieces are missing (seats, radio, some dash pieces, etc.). I am not completely sure what I am going to do for seats yet, so if you guys have any suggestions about that I'd be happy to hear them. The floors in the truck were really nice, with just a couple soft spots behind the rear brace in the cab where the trucks typically rust out. The doors are in fairly tough shape which is why I got the other set of doors with it. Sadly, the bed is too far gone to repair. If you guys have any deals on beds or interior, I'd be interested. Once again, I'm on a really tight budget so coming up with the money to by new bed stuff off of BJ's is out of the picture. 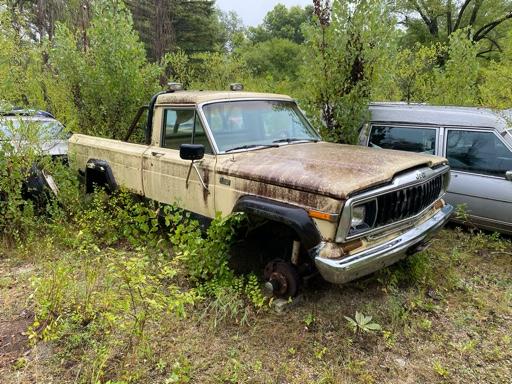 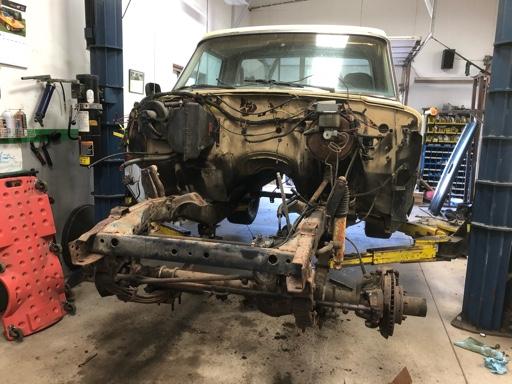 The engine bay with the old engine out 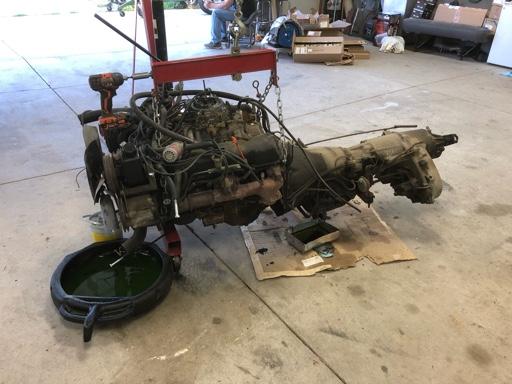 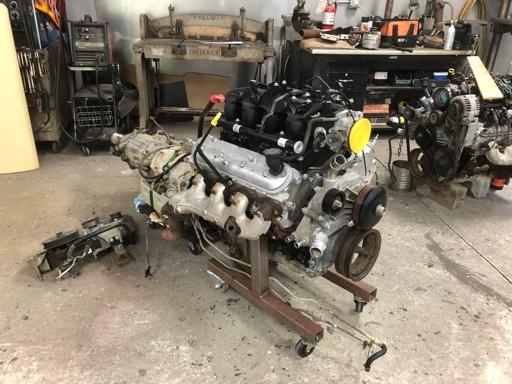 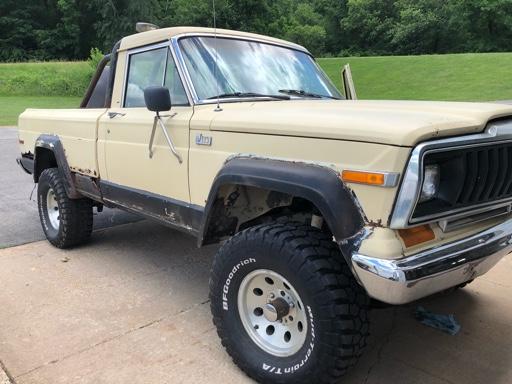 After rolling it out of the shop with the new engine 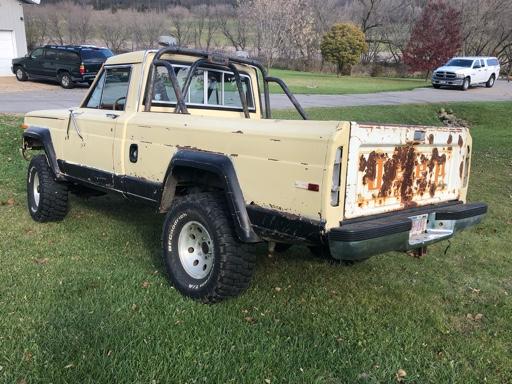 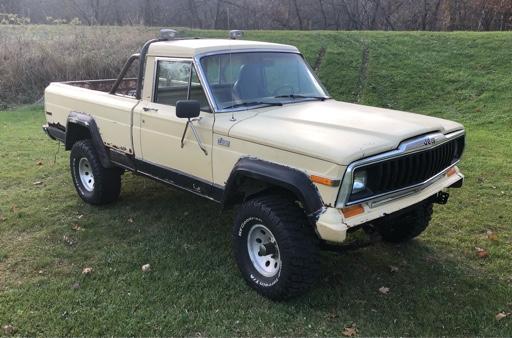 More pics from the “photo shoot” 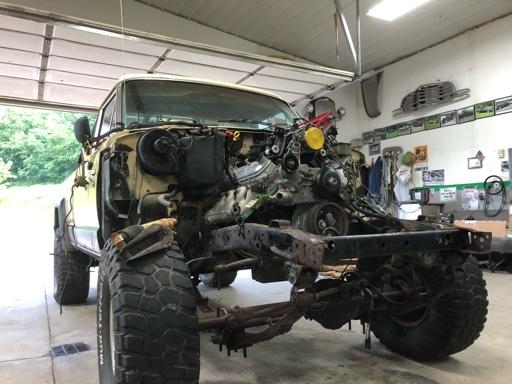 With the new engine in place 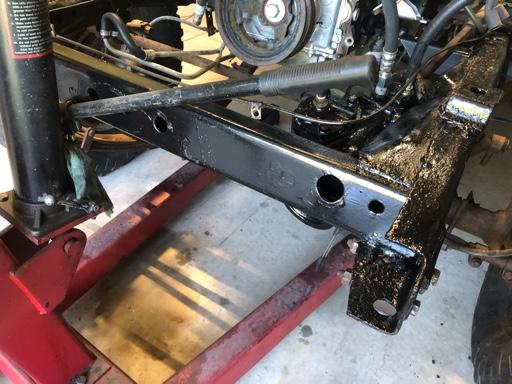 Oh also forgot to mention, we painted the front half of the frame with chassis saver/POR15 to stop any rust 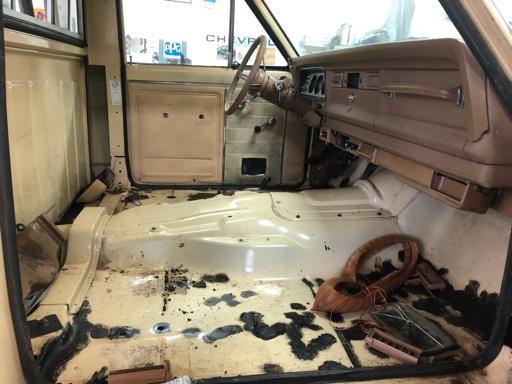 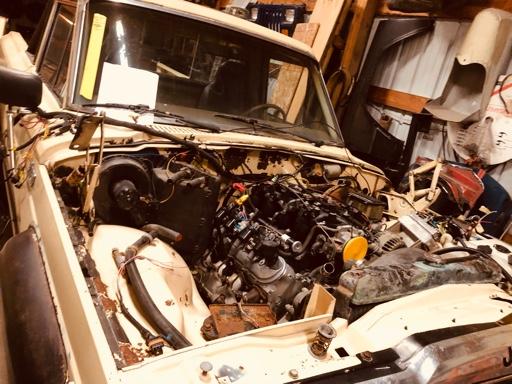 I apologize for the pics not being in order, I’m just going through my camera roll and posting the good ones as I see them

Hey j10guy, like your LS swap great motors, had one in my 2000 Z28 and liked it a lot... on your bed issue, not sure what area you are located in or even if this would be practical for you, but I have seen J10 beds out here in AZ that look in pretty good shape on Facebook Market place, I bought my 88 GW out here and it totally rust free inside and out, one of the perks of living out here and not all the smog laws... yet... anyways just a thought.
Top

Hey boomersrule55, that might possibly work out because this fall, my brother is going to the University of Arizona (he is a senior right now, and will be starting college this coming fall), so he would possibly be able to come look at it when he goes out.

So, another thing I remembered that I will need. So, as you probably read, the truck has a 3-4 inch lift on it, but when we first got it and when I was driving it around the yard, it road completely awful. So, me and my brother decided to unbolt the shocks to see if that helped, and low and behold, it helped, and the shocks were seized. So for any of you guys running lifts, what shocks would you recommend running? I'm not looking for something super fancy and the truck isn't going to be a crawler by any means, just some light towing hear and there, and it will probably see a couple light trails here and there.
1983 Jeep J10 Honcho SWB 5.3 4l60E NP241C viewtopic.php?f=12&t=22361
1979 Jeep J10 LWB (project/parts truck)
1989 GMC Jimmy (project)
Jeep Lover for life

It is kind of surprising, because I live in Wisconsin, where rust is a huge issue. The only thing that helped it was the fact that it didn't see a ton of salt for the past 2 decades because the person just used it around the junkyard (so it didn't see a ton of road time). It had been sitting on the dirt (no wheels or tires) for the past few years, so it is really surprising that the cab is so rust free.
1983 Jeep J10 Honcho SWB 5.3 4l60E NP241C viewtopic.php?f=12&t=22361
1979 Jeep J10 LWB (project/parts truck)
1989 GMC Jimmy (project)
Jeep Lover for life

Thanks for your input rocklawrence.