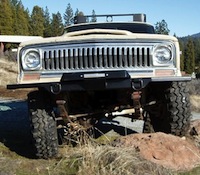 The Full Size Jeep Network was founded in 2005 when there was a need for an alternative Full Size Jeep resource. However in 2008, a server failure caused the site to go down. After nearly three years of being down, the site was put back together. This new and improved site contains many features that the original site which was designed in 2005 did not have. The site was created by Brandon, whom goes by the username Stuka. He has over twenty years of experience owning and working with FSJ's. He is joined by a host of other FSJ owners in hopes of creating one of the best FSJ resources on the web.